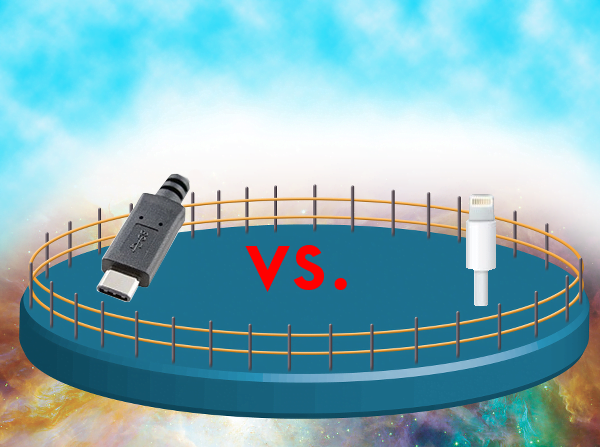 Apple’s iPhone uses a proprietary Lightning connector instead of the industry standard USB-C port. This article compares USB-C vs. Lightning.

UPDATE: March 3, 2021 — According to MacRumors, reliable Apple analyst Ming-Chi Kuo doesn’t expect the iPhone to use USB-C. Apple’s iconic smartphone will stick with a Lightning port until it goes wireless:

“If the iPhone abandons Lightning in the future, it may directly adopt the portless design with MagSafe support instead of using a USB-C port… At present, the MagSafe ecosystem is not mature enough, so the iPhone will continue to use the Lightning port in the foreseeable future.”

Being innovative isn’t easy. To innovate, one must often go against norms and standards. For over a decade, Apple used its proprietary 30-pin dock connector. This connector worked well for Apple products, as it provided room to grow. As Apple devices started adding support for video and other features, the data could be transmitted in parallel through the connector. The problem was that the connector was rather large. For a company that prides itself in making slim devices, it was time for a change.

A Brief History of the Lightning Connector

The Lightning connector was introduced in 2012, much to the dismay of vocal critics. Any change that Apple makes is destined to be criticized. The removal of the iPhone’s 3.5mm headphone jack also created a furor. The common complaint was that people would need to buy new accessories, or at least an adapter. The truth is that the 30-pin connector actually had a very long lifespan. A decade is an eternity in the world of technology. Apple’s 30-pin Dock connector impeded innovation.

The reality is that Apple once again had to go proprietary in order to innovate. Lightning was released two years prior to USB-C. Contemporary technologies, such as micro-USB simply weren’t good enough. Indeed, Apple’s Lightning connector influenced the design of USB-C. Apple actually contributed to the design of USB-C.

The similarities between Lightning and USB-C are obvious, but they’re not the same thing. Lightning ports are slimmer and more suitable for mobile devices. Despite what the rumors suggest, Apple is not going to replace Lightning ports with USB-C on the iPhone and iPad.

UPDATE: 2019 iPad Pro models feature a USB-C port. The iPhone and other iPad models still use the Lightning connector.

A Brief History of USB-C

Debuting in 2014, the USB-C standard evolved from a group of contributors, including 18 Apple employees. There’s a perception that Apple doesn’t play well with others, which is undeserved. The original iMac was actually the first computer that offered USB ports, back when PCs still had parallel and serial interfaces.

USB-C is an evolution of previous USB standards, and an attempt to be future proof (yeah, right). It’s possible to connect an older device to a new computer using a USB-A/B to USB-C cable. There are numerous USB hubs and docking stations that can multiply ports and provide connectivity for older USB devices. That said, the future of device connectivity is wireless, which is why some newer Apple notebooks only have one USB port.

It’s important to note that USB-C and the USB 3.1 standard are not the same thing. It’s possible for a USB-C port to not support USB 3.1. This exactly the sort of confusion that Apple tries to avoid.

Although Apple contributed to the development of USB-C, it’s not the same thing as Lightning. The most obvious difference is that Lightning ports are smaller. This gives Apple an advantage. They can make slimmer devices.

Lightning may also be more durable than USB-C. With Lightning, the connecting tabs are on the cable itself. USB-C has connecting tabs on the port. Since these tabs are possible points of failure, Lightning ports are more durable. If you happen to break the tabs on a Lightning cable, it’s easily remedied by replacing the cable. If they break on a USB-C port, the port on the device must be replaced. This is a huge difference in durability. 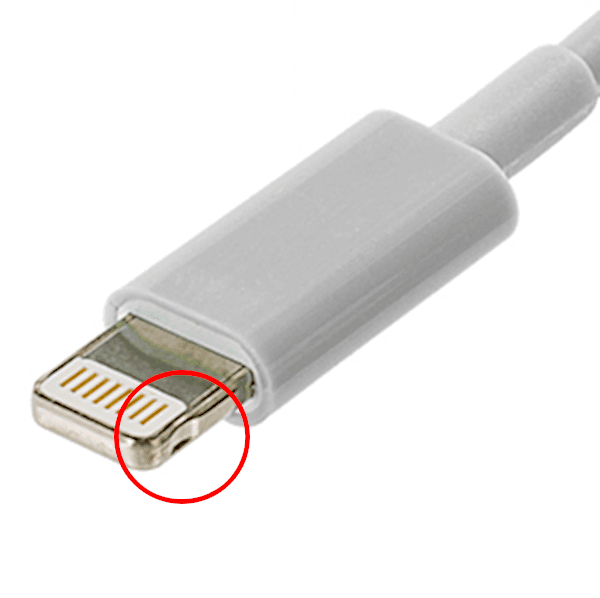 Both Lightning and USB-C are capable of conducting power at varying wattages. Apple doesn’t publicly disclose these specifications, however, they are available to third-party manufacturers. It seems that the power limits of USB were one of the reasons why Apple developed Lightning in the first place.

It’s safe to assume that Lightning can handle up to 12W of power, as provided by the iPad charger. Lightning can probably handle much more wattage, however, since it is designed for mobile devices, it’s simply not necessary. USB-C on the other hand, is known to handle up to 100 watts. This makes sense for desktop computers that are plugged in to a power source. USB-C could power a fairly loud amplifier or even a screen. This doesn’t mean that Lightning can’t do this, but your iPhone isn’t going to power a 100 watt amplifier. Since Lightning is not available on desktop computers, transmission of high wattage power isn’t necessary, although may be theoretically possible.

Data transmission speeds depend more on USB standards for both Lightning and USB-C. Lightning devices usually connect to a computer for data transfer. This is facilitated by a Lightning to USB cable. The data throughput actually depends on the ports on the source and target device. The first Lightning devices transferred data at USB 2.0 speeds. Newer devices have embraced newer USB standards. Apple hasn’t divulged the maximum theoretical data throughput for Lightning. In the real world, it is fast enough to take advantage of the newest standards.

Lightning connectors use far fewer pins than USB-C, but the latter doesn’t use all of its pins. Although USB-C uses 18 pins, only 9 are used at the same time. This allows the connector to be reversible. Lightning only uses 8 pins, however, the plug fits into the receptacle in a way which allows it to be reversible. Furthermore, electronics inside Apple devices determine the orientation of the plug and adjust accordingly. It sounds like a lot of effort, but it makes for a slimmer receptacle. This enables Apples to make such slim iPhones and iPads.

Lightning Is the Right Tool for the Job

Apple developed Lightning at a time when chunky USB ports were the only standard option. In order to make slimmer iPhones, it was necessary to develop their own proprietary connector. USB-C was two years away, and it still ended up having a larger footprint than Lightning.

Lightning is simply the right tool for the job. It’s intended for mobile devices. Not only is the connector smaller, but it is more robust. If you think about the abuse a mobile device takes, the latter aspect is appealing. Apple customers pay a premium price for iPhones and iPads and expect them to last. If Apple went with USB-C, their devices would be larger and more fragile.

Apple haters recoil at the very notion of Lightning. Once again, they claim Apple is creating something proprietary. “They don’t play well with others”. This simply isn’t true. Apple was a significant contributor to the USB-C standard. They quickly adopted this standard and added it to their MacBook lineup. The slimmer design of USB-C allowed them to create the thinnest MacBooks ever, while still retaining compatibility with standard peripherals.

The fact that MacBooks use USB-C and not Lightning demonstrates that Apple conforms to standards. But they also use the right tool for the job. For iPhones and iPads, the slimmer and more durable Lightning port was a great fit.

A lot of these decisions and outcomes are based on history. Lightning debuted two years prior to USB-C. Apple needed to make slimmer iPhones right away, and existing USB technology just didn’t provide the right solution. Now that Lightning is ingrained, Apple can’t just replace it with USB-C. This would be a slap in the face to customers and accessory makers. Also, USB-C is larger and less robust than Lightning. It’s simply more appropriate for mobile devices.

Wireless is the Future

Clickbait bloggers raised the possibility that Apple is replacing Lightning with USB-C. As we’ve covered, Lightning is still much more appropriate for mobile devices. Why would Apple replace Lightning with something that’s bigger and more fragile? They would also anger customers and accessory makers with such a move. It just doesn’t make sense.

Wireless is the future of device connectivity. This is exactly why Apple removed the 3.5mm headphone jack from the iPhone 7. It’s why the MacBook only has one USB-C port. People are simply not plugging devices into their computers, tablets and smartphones. Wireless headphones have replaced their wired ancestors. Printers, scanners and external drives are all wireless these days. You can even wirelessly connect to some displays. As wireless technology improves, the need for cables and ports will gradually be eliminated. Apple will replace Lightning with nothing. Your future iPhone won’t have any ports, making it much more durable and waterproof. When this day comes, critics will cry foul, but the vast majority of consumers will be better off. The days of dongles, adapters and messy cables are almost over. Good riddance!