I use Apple Music every day and hoped iOS 9 would improve the music streaming app. There are small improvements. I can now see my correct listening history on the Up Next list.

Unfortunately, when I try to add an album to My Music, it no longer works. I made several attempts over a few days, but it is not being added. This used to work. It seems as though they fixed some issues and introduced new or regressive bugs in the process.

I also experienced several long audio dropouts while listening last night. Apple Music can no longer play music reliably. I closed the app and watched TV instead. I tested my Internet connection, and the speeds were fast. I had no problem watching HBO NOW on my Apple TV. I tried again later, and experienced even worse audio dropouts.

This is bad timing, as early Apple Music adopters are deciding whether to continue with paid subscriptions. I am going with Spotify. It was never this buggy. I prefer the design and Siri integration with Apple Music, but the app fails at playing music.

I gave Apple Music a chance and hoped for the best. Only Apple can offer Siri integration with their Music app. If Apple Music can’t play music without audio dropouts, it is unusable. I turned off auto-renewals so I won’t be charged for Apple Music. I gave Apple a chance, but they seem incapable of developing a stable music streaming app.

I can’t cut Apple slack because iOS 9 is a “.0” release. Apple Music was buggy through all versions of iOS 8. This isn’t rocket science. It’s a music streaming app and something Spotify has been able to deliver with quality and without the “revolutionary” marketing hubris. There’s nothing revolutionary about Apple Music. They copied Spotify, Rhapsody, Deezer and Rdio and did it poorly, with little innovation and too many defects.

iOS 9 is supposed to offer better performance than its predecessor. In many ways, this is true. It gets better GeekBench 3 benchmarks. Scrolling is smoother. You should experience better gaming. Overall, it is faster than iOS 8.4.1, with some notable exceptions.

Multitasking seems to have deteriorated in iOS 9. Whenever there is background network activity, such as sending an email, Spotlight and the App Switcher are extremely slow. I am often unable to close apps. The App Switcher seems to freeze, but after several seconds it comes back to life. It takes several seconds for the Spotlight search field to appear, and many more seconds to display results. If you have an older device, you have to accept that multitasking doesn’t work. Just let your email send and then move on to the next task.

By default Spotlight for iOS 9 is extremely slow. I use Spotlight to launch apps. I even cleared off my first home screen so I could enjoy an unobstructed background. Spotlight must be fast, or it will encumber my entire iOS experience.

Fortunately, there is a way to speed up Spotlight. Tap on Settings > General > Spotlight Search to refine searching capabilities. You will notice that Spotlight Search options are different now. You have no ability to configure broader search functionality. You can only toggle search for individual apps. Do people really want to search Angry Birds? Really? 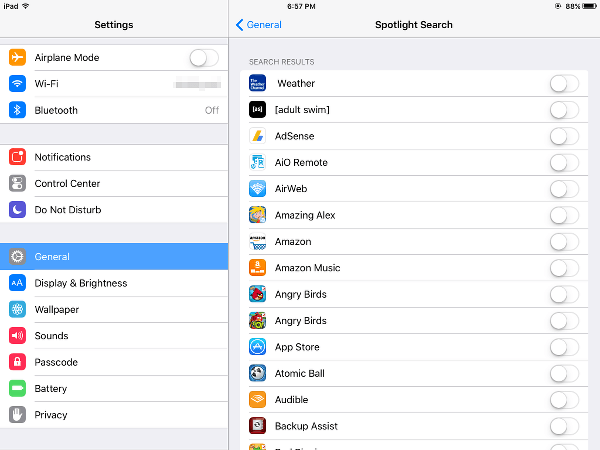 I turned off searching on every app, and returned to see it activated on a few apps. On the second attempt, search was turned off on all apps.

Unlike most iOS releases, users aren’t complaining about diminished battery life with iOS 9. My iPad 2 has about the same battery life. Apple’s engineers improved battery life with this release. iPhone users will also be able to launch Low Power Mode to squeeze an extra hour from their device. Tap on Settings > Battery to enable Low Power Mode. This feature will slow down your iPhone. It seems to under clock the processor, in addition to activating other battery-saving settings. (continue…)