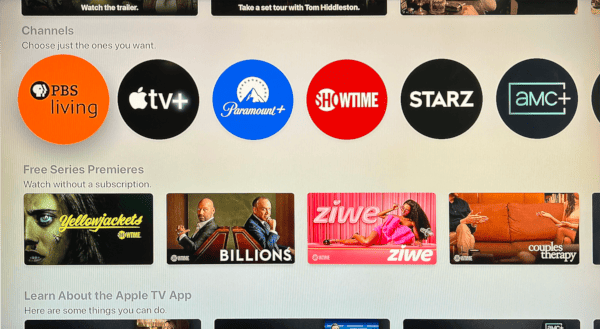 Since its debut in 2007, Apple TV has gradually improved its channel lineup. Let’s take a look at Apple TV’s channels and what they have to offer.

This article presents a complete guide to Apple TV channels. Whether you have a new Apple TV or an older model, we’ll cover how to access Apple TV channels and available networks. The information presented here is also valuable for those using the Apple TV app on an iPhone, iPad, Mac, Windows PC, Xbox, smart TV, or other devices.

Two main divisions exist in the Apple TV world — legacy Apple TV and modern Apple TV. The second and third-generation models, which cannot run tvOS, are still used by many people today. Although they can’t run apps and have fixed channels, AirPlay allows users to beam content from an iPhone, iPad, or iPod touch. Fourth-generation and later Apple TV models run tvOS and feature the App Store. These devices run the Apple TV app, and users can subscribe to Apple TV+.

After several years, splitting this page into two articles became necessary. Apple TV channels evolved beyond the Apple TV device. People can now access this content on an iPhone, iPad, Mac, Windows PC, or smart TV. The channels are different too. Older Apple TVs had more channels; however, without an App Store, they’re far more limited than newer models.

Many Apple TV “channels,” such as Netflix, are sold as complete apps downloaded from the App Store. On older Apple TV models, they baked these into the system. Users activated Netflix, Hulu, and other services by subscribing. Eventually, Apple provided the ability to hide channels on the Home Screen of older models as more content options joined the fray.

If you have a modern iPhone, iPad, Apple TV, computer, or smart TV and you’re looking for information on Apple TV Channels, look no further. This article lists every Apple TV channel in alphabetical order, along with its price. We’ll also examine how to subscribe to and cancel Apple TV channels. Those who still own second and third-generation Apple TVs should read “Legacy Apple TV Channels for Second and Third Generation Apple TVs.”

What is Apple TV Anyway?

Apple employees and consultants are generally adept at naming products and services. Apple TV is an exception. The overloaded term describes a device, an app, and a service. It’s a premium service when you add a “+” to the end, making it Apple TV+.

Let’s reiterate — Apple TV is a device, an app, and a service. The Apple TV device is a hockey-puck-sized unit that connects to a flat-screen TV with an HDMI cable. Apple TV is also an app that runs on almost all Apple devices, Windows 10, Xbox, and many more gadgets. It’s surprising to see Apple branch out; however, they’re trying to compete with Netflix. Like Netflix, Apple TV+ is a subscription service offering TV shows and movies produced by Apple.

What Are Apple TV Channels?

PBS Living is a perfect example of a modern-day Apple TV Channel. It doesn’t have a presence on cable TV. At $2.99 per month, forget about the latte analogy. It costs less than a cheap cup of coffee at a fast-food restaurant. You also get what you pay for. The content is limited, but that’s the point.

Apple TV Channels are specific, inexpensive, and mostly unique experiences. Some providers, such as Starz, offer their complete service as an Apple TV channel. However, most take advantage of Apple TV to provide viewers with something different.

For legacy Apple TV owners — those with second and third-generation models — Apple TV Channels are similar but much more basic. These primordial Apple TV units don’t have an App Store because they can’t run tvOS. They’re essentially glorified iPods that connect to your TV. Instead, Apple TV Channels appeared when Apple updated the Home Screen.

These legacy Apple TV Channels are covered in another article. They haven’t changed in years, and they don’t apply to most people. Unlike modern Apple TV Channels, these only exist on older Apple TV units and never made their way onto the iPhone or other devices. I suspect there are probably a few million second and third-generation Apple TVs still in use today. However, the majority of Apple TV customers will find the most relevant information right here.

For this section, let’s assume you’re using an Apple TV. The Apple TV app is available on many devices and platforms; however, one of the best experiences is using a flat-screen TV and an Apple TV box. Assuming that you’re on the Home screen of Apple TV, the following steps will guide you through accessing and subscribing to Apple TV channels.

Subscribed channels appear in the same list, ordered by the ones you’ve activated on the left. When you want to browse your subscribed Apple TV channel, launch the Apple TV app, choose the Watch Now tab, and scroll down to the Channels list.

Unfortunately, Siri is incapable of servicing channel-specific requests. Simply asking Siri to “open the PBS Living channel” or any permutation of this request doesn’t work. Apple’s intelligent assistant continually steers the user to the App Store, perhaps hoping they’ll make another purchase. For now, using the Siri remote to navigate the Apple TV app provides the easiest way to access your favorite channels.

Apple is a little sneaky when it comes to subscriptions. By default, they turn off email receipts. Many people subscribe to Apple services they don’t use at all, yet they’re entirely unaware of this wasteful situation. Even worse, it’s so simple to cancel an Apple service. You can do it on your iPhone, iPad, or other devices. Although it’s not hidden, Apple doesn’t make it obvious how to cancel Apple TV channel subscriptions. Find out how to turn on email receipts and cancel Apple TV channels.

The following Apple TV Channels are available on fourth-generation (or later) Apple TV units, as well as the iPhone, iPad, Mac, Windows computers, Xbox, and myriad other devices. Most channels offer a trial period of 7 days before billing begins. This information is clearly displayed on each channel’s home screen.