Microsoft announced a new tool to migrate iOS code to Windows 10 — the Windows Bridge for iOS. The new technology will allow iOS developers to quickly recompile their apps for Windows computers and mobile devices.

Despite the phenomenal growth of Apple over the past decade, Microsoft is still a relevant corporation. Walk down the aisles of any corporate cube farm, and you’ll see nothing but Windows computers. They might not be running the latest version of Windows, but these devices are the mainstay of corporate computing.

Microsoft is still the dominant player in modern computing. It is important not to confuse the growth of Apple or other tech companies with market hegemony. It is true that the iPhone and Mac are growing in popularity. However, Apple is still far behind when it comes to market share. Even though Windows phones and tablets have failed to dominate mobile computing, the Windows PC is still, by far, the most popular computing device on the planet. It’s completely reasonable to consider a Windows notebook computer, some offering touch screens, to be a mobile device.

Internet tech news is full of bold predictions of the future. Based on dubious data from analytics firms, tech pundits proclaim the dominance of one platform over another. The data are often based on surveys and sales figures. These types of data don’t reveal usage. If you’re a developer trying to figure out which platform to prioritize, usage is important. Microsoft Windows has never lacked killer apps.

Windows consumers are notoriously conservative when it comes to upgrading hardware and software. In fact, there are more Windows XP users than iOS users. That’s just one version of Windows that was released 14 years ago and is now considered obsolete. When you compare all versions of Windows with all other desktop and mobile operating systems, Microsoft has about 80% market share, in terms of usage. 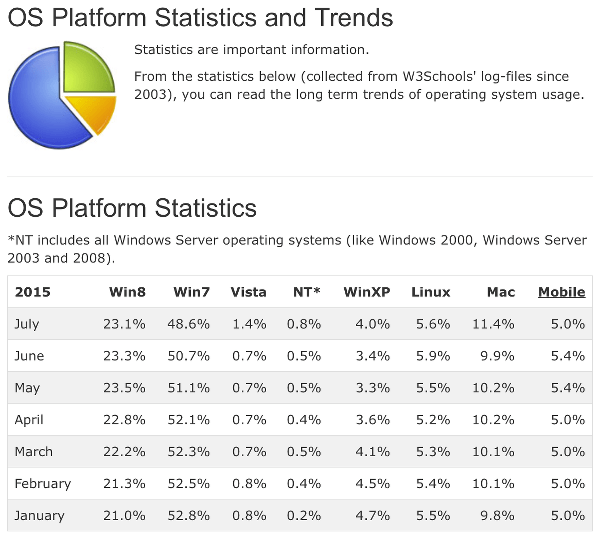 Keep in mind, the data vary widely based on the source. Analytics firms are often inclined to paint a rosy picture for their clients. They don’t lie, but they only show the data that look favorable. Even statistics based on usage can vary widely, depending on the usage being measured.

It seems like something as objective as operating system market share is very difficult to measure accurately. The preponderance of the data show that Microsoft Windows is still tremendously popular. Betanews reported on an IDC estimate showing a 30% growth in Windows 2-in-1 (notebooks with touch screens) devices. Given the inexpensive nature of these devices compared to the iPad, this is not surprising. Microsoft is still very entrenched in corporate and personal computing. I own nothing but Apple products, but I can’t deny this reality, having worked in enterprise computing.

It’s a fact that Windows is still a popular operating system. This presents opportunities for developers. Microsoft’s mobile endeavors have not gained much traction over the years. Mobile developers overwhelmingly favor iOS and Android. Microsoft is aware of this reality, which is why they have gone to great lengths to court iOS and Android developers.

Moving any app from one operating system to another is never an easy task. As a former Java developer, I know that even migrating a Java app to different platforms or app servers usually requires some revision. Although Microsoft makes it easier, it is not a push-button solution. Developers will need to re-work some code and, in many cases, redesign user interfaces. There are some services that won’t be available to Microsoft apps, however, they provide alternatives in most cases. Microsoft has made this as easy as possible. I expect, given the tremendous market share of Windows, most serious developers will be willing to put forth the effort. (continue…)