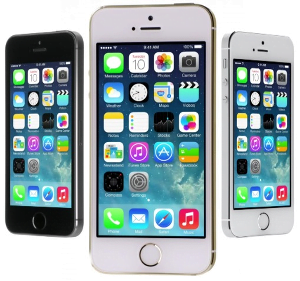 Apple unveiled the new iPhone 5S at their Cupertino headquarters. The new device features a fingerprint scanner, blazing fast 64-bit processor, and a new motion co-processor. The new iPhone will be available for purchase on September 20. Many in the media claim the iPhone 5S is not innovative. The device is clearly an improvement on the iPhone 5.

The new iPhone comes in metallic colors — silver, gold, and “space gray”. Other than the new colors and stainless steel ring around the home button, the device is almost identical to the iPhone 5. In fact, it is the same size and weight, which is an amazing feat, considering the improvements.

Touch ID is an innovative way to unlock the iPhone. It also authenticates iTunes purchases. Apple will likely use this feature to authenticate with other services, such as electronic payments, Passbook, and third-party apps. As it stands, developers will not have access to Touch ID functionality. The APIs are private. Only Apple can use the feature.

The fingerprint scanning works with multiple fingers at any angle. Before the feature is used, it must be setup. The user calibrates the fingerprint scanner by pressing fingers on the home button, following directions on the screen. The data are never stored in the cloud. Instead, fingerprint data are stored in the “enclave” — a secure, encrypted storage space embedded on the A7 chip. Even with this secure design, privacy fanatics with little understanding are voicing concerns about the technology. There’s nothing to worry about. If anything, Touch ID will enhance privacy. It will be much harder for someone to break into your device.

The new A7 processor raises the bar for mobile computing. It is the first 64-bit processor for mobile devices. 64-bit technology allows a device to access more memory. 64-bit registers can address far more memory than 32-bit. A 32-bit system can address 4GB of RAM, while 64-bit can theoretically utilize over 16 million terabytes (1 TB = 1000 GB).

A few have already criticized the A7 processor as superfluous marketing hype. They contend that since the iPhone 5S only has 2GB of RAM, a 64-bit processor is meaningless. This isn’t true. A 64-bit system can utilize larger files, even if RAM is less than 4GB. It allows for disk-to-memory swapping, also known as virtual memory. With solid state drives, virtual memory is quite fast and useful. This is why you never really need to close apps on an iPhone. When the system needs more resources, it persists other apps to the solid state disk. Of course, since some apps run in the background, closing certain apps can help preserve battery life.