HealthKit and HomeKit Improved on iOS 9

HomeKit has proven to be successful and is supported by several manufacturers. In addition to controlling locks, lights and thermostats, HomeKit can now operate window shades, security systems and various sensors.

HomeKit devices can be accessed directly through iCloud, allowing home automation no matter where you are. This also squashes the rumor that Apple TV would be a hub for HomeKit.

CarPlay is Wireless with iOS 9

Is Apple working on their own car? Probably not. But they are very interested in the technology inside cars. iOS 9 brings more improvements to Apple’s CarPlay technology. Foremost, CarPlay is wireless and no longer requires a lightning cable connection. Users can simply enter their car and leave their iPhone in their pocket, purse or briefcase. This will only work with upcoming CarPlay units.

Auto-makers can now create apps that operate specific functions of a car. This can be controlled directly from CarPlay. The size, shape and resolution of CarPlay compatible units can now be modified, giving manufacturers more design freedom. Widescreen CarPlay units will be available soon.

Swift, Apple’s relatively new programming language, has taken the world by storm. It is a game changing technology that will disrupt the programming world even more than Java. Apple sees Swift as a technology that will go beyond mobile apps. In addition to developing OS X apps, the language can now be used on Linux. IBM, the biggest proponent of enterprise Java, has also embraced the language for enterprise application development. 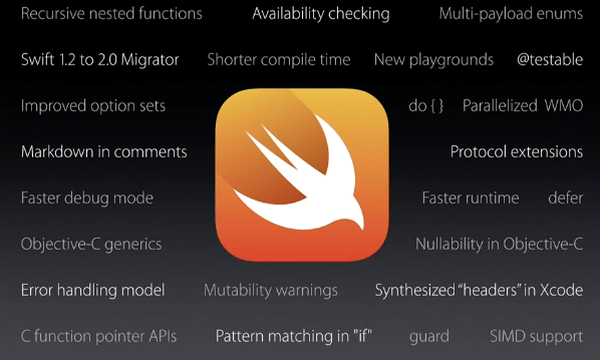 Swift is easier than Java, but allows developers to compile fast and responsive native apps, instead of apps that run in a virtual machine. We can only hope that Swift doesn’t follow Java in becoming bloated and convoluted so that consultants can bill more hours. This is where Apple’s interests may differ from participating companies like IBM.

Perhaps the biggest news is that Swift will now be open source. This is a requirement for the language to take off. The potential is huge.

Swift has moved beyond mobile app development and is poised to be the de facto standard for most programming tasks. It will still take years for this to happen. Given the simplicity of the language and its ability to enable rapid application development without impacting performance, Swift is destined to be the next great programming technology.

If you are an early adopter and registered Apple Developer, you can download the iOS 9 beta right now. Everyone else can install the public beta version in July. Keep in mind, this is an unstable product. Don’t install it on any device that must “just work”. I recommend installing the beta on an old, unused device. For those who are less anxious, iOS 9 will be released in September.

Apple’s newest operating system will run on any device that supports iOS 8. That’s unbelievably generous, but they also do it so they can boast about how many users have adopted iOS 9. The iPad 2 (or newer), iPad mini (or newer), iPhone 4S (or newer) and 5th generation iPod Touch can all run iOS 9. I am still amazed that I can install iOS 9 on my almost-5-year-old iPad 2, and it should actually run faster and have better battery life!