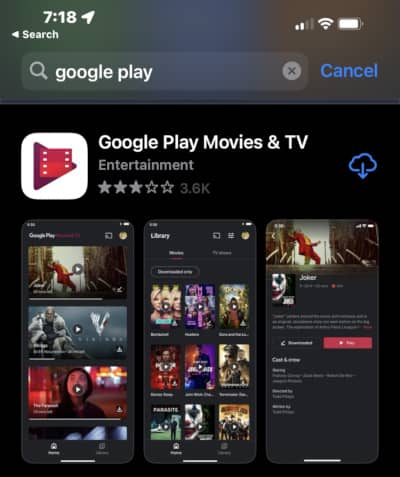 iOS users now have another option for movies and TV shows. Google Play is now available for your iPhone, iPad and iPod touch.

With iTunes, Netflix, Hulu Plus, Amazon and other content providers in the fold, Apple’s iOS mobile operating system has a lot of content. Google Play for iOS adds even more options and is a great addition for iOS users who have adopted Chromecast. This move demonstrates Google’s commitment to provide apps and content for Apple devices. With hundreds of millions of users, iOS is a market that can’t be ignored.

The Google Play iOS app is currently available in both iPad and iPhone/iPod Touch versions. The app allows users to play movies and TV shows purchased or rented from Google Play.

Much of the tech press claims that Google Play for iOS does not support AirPlay. It is possible to use AirPlay Mirroring with Google Play, however, the quality leaves much to be desired. If you want to beam Google Play content onto your TV, consider purchasing the Chromecast device.

How to Buy Movies and TV Shows

Why Use Google Play?

Google Play also offers free episodes of TV shows. Users are required to create a Google Wallet account in order to download free episodes, however, no charges are applied. This is a great way to test-drive Google Play for iOS. Look for free episodes at the bottom of the Google Play Movies and TV shows page.

The Google Play app for iOS was just released, so there are a few limitations. It doesn’t have built-in support for AirPlay. AirPlay Mirroring will work, but offers poor video quality.

Users wishing to watch Google Play on the big screen can purchase a Chromecast streaming device. Chromecast is a small profile device that plugs directly into the HDMI port of any flat screen TV. Once installed, users can stream video from an iOS device using Chromecast. Chromecast works with a variety of other devices, including Android mobile devices, Macs and Windows PCs.

Google’s video streaming technology also supports Netflix, YouTube, HBO GO, Hulu Plus and Pandora, in addition to Google Play. Chromecast is a great alternative for those who just want a basic streaming device. Keep in mind, Chromecast is not a standalone device, but requires a mobile device or computer to act as a controller. Think of it as an audio/visual receiver.

The Google Play app doesn’t support in-app content purchases. As mentioned, this isn’t much of an inconvenience. Simply point your browser to Google Play to make a purchase.